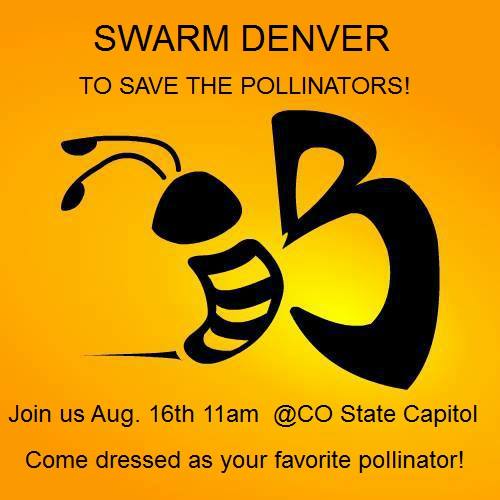 DENVER (August 15, 2014) – March Against Monsanto – Denver in collaboration with Bee Against Monsanto- Denver, has announced that on August 16, they will join activists around the world in a global Swarm to Save the Bees. Organizers of the Denver event are asking attendees to come dressed as their favorite pollinator to “Swarm Denver” in a family friendly march and ‘Colony Collapse’ to bring awareness along the 16th St Mall!

David Wheeler, Bee Safe Neighborhoods, A musician and musicologist who has taught and performed the Japanese bamboo flute called the shakuhachi for over 35 years, David Kansuke Wheeler is also a parent, a housekeeper and back yard gardener.

Don Studinski, dba Honeybee Keep, is a permaculture enthusiast and member of the board of directors at Living Systems Institute (LSI) where he applies permaculture philosophy to beekeeping. Honeybee Keep manages Colorado’s first Certified Naturally Grown (CNG) apiaries: LSI in Golden and Cottonwood Farm in Boulder. As a beekeeping mentor, Don provides advice and counsel for students throughout the United States, teaches classes and performs public speaking events. He writes extensively about beekeeping on his own website and for a variety of others, including Bee Culture magazine, Peak Prosperity, Selene River Press and Honeybee Haven.

Janet Muse, LSW is a Licensed Social Worker currently serving as a child and family therapist. Janet is also an E-RYT yoga instructor registered through the yoga alliance, and a trained birth doula. She is an activist in the areas of bee/pollinator protection, environment/wildlife protection and conservation, civil rights, animal rights, and breed specific legislation (removing it that is). In short, her work is to promote the mental and spiritual health and well-Being of the animals, individuals, and families she is so blessed to serve.

For local media inquiries, to schedule an interview, or for general information, contact Ellice Campbell at ellicecampbell@enlightenedlotuswellness.com.

May 24, the second annual ‘March Against Monsanto’  to take place

at the City of Cuernavaca Park, 10am

DENVER (May 19, 2014) – March Against Monsanto has announced that on May 24, tens of thousands of activists around the world will once again “March Against Monsanto.”  Currently, marches will occur on six continents, in 52 countries, with events in over 400 cities. A comprehensive list of marches can be accessed at www.march-against-monsanto.com.   The new larger, but still central location at the  City of Cuernavaca Park will allow for music, GMO educational speakers, as well as activities for the kids including a Butterfly Wing Making Craft Area.  The vending area will include a variety of healthy and environmentally friendly businesses and programs.   This year, organizers have focused on providing an educational, family friendly event and have chosen a Save the Bees & Butterflies theme. The focus on raising awareness and education is necessary since Right to Know Colorado GMO has formally launched a campaign demanding mandatory labeling of genetically modified foods or GMOs across Colorado.  The ballot initiative was approved by the Colorado Supreme Court in March, and now 86,105 notarized signatures must be collected by August 4, to force a November GMO label election.   Speakers & Performers to include: Dr. Katherine Peterson, ND,  practices as a Primary Care Naturopathic Physician here in Colorado.   She has had a lifelong interest in medicine and has a diverse background working with ski patrol, EMT-IV, chiropractic assistant, dialysis Tech, hospice worker, personal trainer and yoga instructor.   Local favorites, the Wandering Monks are scheduled to perform. Originating in the socially barren environment of the front range of Colorado, Wandering Monks is a musical entity consisting of rapper/producer McAD and his emcee partner Linguistory. The duo has worked tirelessly to create a unique brand of conscious underground hip hop that blends multiple genres yet maintains a unique sound.   Community Partners supporting the March Against Monsanto ~Denver include , Natural Grocers by Vitamin Cottage, Right to Know Colorado, Moms Across America,  Food & Water Watch, and the Institute for Responsible Technology. Official national website: www.march-against-monsanto.com. Denver MAM online: https://mamdenver.org/   For local media inquiries, to schedule an interview, or for general information, contact Ellice Campbell at ellicecampbell@enlightenedlotuswellness.com. ### 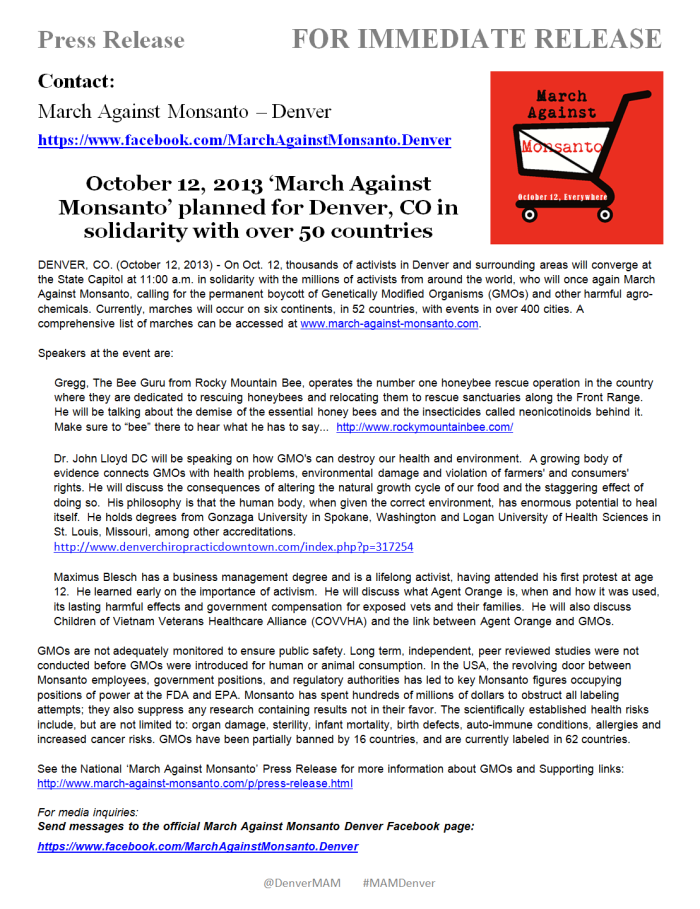 October 12, 2013 ‘March Against Monsanto’ planned for Denver, CO in solidarity with over 50 countries

DENVER, CO. (October 12, 2013) – On Oct. 12, thousands of activists in Denver and surrounding areas will converge at the State Capitol at 11:00 a.m. in solidarity with the millions of activists from around the world, who will once again March Against Monsanto, calling for the permanent boycott of Genetically Modified Organisms (GMOs) and other harmful agro-chemicals. Currently, marches will occur on six continents, in 52 countries, with events in over 400 cities. A comprehensive list of marches can be accessed at www.march-against-monsanto.com.

Speakers at the event are:

Gregg, The Bee Guru from Rocky Mountain Bee, operates the number one honeybee rescue operation in the country where they are dedicated to rescuing honeybees and relocating them to rescue sanctuaries along the Front Range.  He will be talking about the demise of the essential honey bees and the insecticides called neonicotinoids behind it.  Make sure to “bee” there to hear what he has to say…  http://www.rockymountainbee.com/

Dr. John Lloyd DC will be speaking on how GMO’s can destroy our health and environment.  A growing body of evidence connects GMOs with health problems, environmental damage and violation of farmers’ and consumers’ rights. He will discuss the consequences of altering the natural growth cycle of our food and the staggering effect of doing so.  His philosophy is that the human body, when given the correct environment, has enormous potential to heal itself.  He holds degrees from Gonzaga University in Spokane, Washington and Logan University of Health Sciences in St. Louis, Missouri, among other accreditations.  http://www.denverchiropracticdowntown.com/index.php?p=317254

Maximus Blesch has a business management degree and is a lifelong activist, having attended his first protest at age 12.  He learned early on the importance of activism.  He will discuss what Agent Orange is, when and how it was used, its lasting harmful effects and government compensation for exposed vets and their families.  He will also discuss Children of Vietnam Veterans Healthcare Alliance (COVVHA) and the link between Agent Orange and GMOs.

GMOs are not adequately monitored to ensure public safety. Long term, independent, peer reviewed studies were not conducted before GMOs were introduced for human or animal consumption. In the USA, the revolving door between Monsanto employees, government positions, and regulatory authorities has led to key Monsanto figures occupying positions of power at the FDA and EPA. Monsanto has spent hundreds of millions of dollars to obstruct all labeling attempts; they also suppress any research containing results not in their favor. The scientifically established health risks include, but are not limited to: organ damage, sterility, infant mortality, birth defects, auto-immune conditions, allergies and increased cancer risks. GMOs have been partially banned by 16 countries, and are currently labeled in 62 countries.