May 24, the second annual ‘March Against Monsanto’  to take place

at the City of Cuernavaca Park, 10am

DENVER (May 19, 2014) – March Against Monsanto has announced that on May 24, tens of thousands of activists around the world will once again “March Against Monsanto.”  Currently, marches will occur on six continents, in 52 countries, with events in over 400 cities. A comprehensive list of marches can be accessed at www.march-against-monsanto.com.   The new larger, but still central location at the  City of Cuernavaca Park will allow for music, GMO educational speakers, as well as activities for the kids including a Butterfly Wing Making Craft Area.  The vending area will include a variety of healthy and environmentally friendly businesses and programs.   This year, organizers have focused on providing an educational, family friendly event and have chosen a Save the Bees & Butterflies theme. The focus on raising awareness and education is necessary since Right to Know Colorado GMO has formally launched a campaign demanding mandatory labeling of genetically modified foods or GMOs across Colorado.  The ballot initiative was approved by the Colorado Supreme Court in March, and now 86,105 notarized signatures must be collected by August 4, to force a November GMO label election.   Speakers & Performers to include: Dr. Katherine Peterson, ND,  practices as a Primary Care Naturopathic Physician here in Colorado.   She has had a lifelong interest in medicine and has a diverse background working with ski patrol, EMT-IV, chiropractic assistant, dialysis Tech, hospice worker, personal trainer and yoga instructor.   Local favorites, the Wandering Monks are scheduled to perform. Originating in the socially barren environment of the front range of Colorado, Wandering Monks is a musical entity consisting of rapper/producer McAD and his emcee partner Linguistory. The duo has worked tirelessly to create a unique brand of conscious underground hip hop that blends multiple genres yet maintains a unique sound.   Community Partners supporting the March Against Monsanto ~Denver include , Natural Grocers by Vitamin Cottage, Right to Know Colorado, Moms Across America,  Food & Water Watch, and the Institute for Responsible Technology. Official national website: www.march-against-monsanto.com. Denver MAM online: https://mamdenver.org/   For local media inquiries, to schedule an interview, or for general information, contact Ellice Campbell at ellicecampbell@enlightenedlotuswellness.com. ### 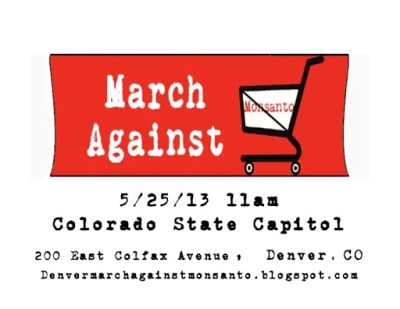 Colorado, we want to hear from you!

Send submissions to JustSayNoGMO.Denver@gmail.com. You never know, we may use your comment or submission for promotion or while talking with the media! Add your voice to the conversation!